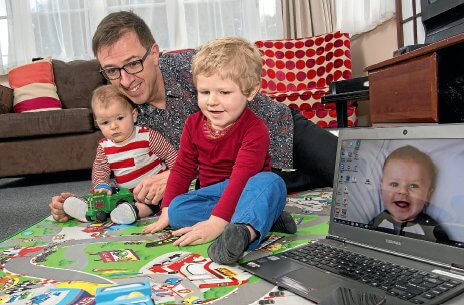 I am thrilled to be able to share this article with you from the Careers section of the Wellington newspaper, the Dominion Post, which was published on July 29th 2107 and written by freelance journalist Deb Tapp.
I welcome you to take 5 minutes and have a read to find out more about me and not only my professional career path but also my personal and, now, family life.

Marketing strategist Jamie Houston helps businesses, but he gets a kick out of teaching music too.

Wellingtonian Jamie Houston gets his fair share of strange looks when he tells people he’s “the back-end guy”.

“I met this lady the other day who asked what I did, I said ‘I look after your back end’, of course her mouth dropped and she looked at me and said ‘well you don’t look after mine’,” he laughs.

“I do it on purpose, they might not remember my name but they remember that I’m the back-end guy, it’s about getting people interested in what I do.”

Jamie is no health professional, as many suspect after such conversations but he is a back-end marketing strategist.

In a nutshell, it means he specialises in helping businesses implement what he describes as sales and marketing funnels and campaigns that quickly lead to more business by simply tapping into their existing databases.

“I specialise in past client reactivation, I talk about getting that old database out of the cupboard and dusted off because they are the people who have already spent money with you, why not nurture them, engage them and find out who is ready to buy off you again?”

He believes too many businesses “flush their profits down the toilet” by spending all their marketing budgets on the front end, that is finding new leads and converting them into clients.

“As funny as it may sound, when it comes to your business, looking after your back end really is serious business,” says Jamie.

As he explains, it’s about having the proper customer follow-up systems in place to maximize the “lifetime value” of each customer so that they buy again, and even make referrals to friends, family and social and business connections.

Through his own Lower Hutt-based company, Honk Marketing, Jamie builds these “marketing funnels” by using email and web pages for his clients after several meetings about the course of action.

Right now he’s building a new marketing campaign for one client, and uses a third party email marketing platform, through which an offer is made, and based on recipients’ actions figures out who is ready to buy.

“I will be creating and building a landing page, a specific web page related to the campaign not a generic website, I will make sure all the I’s are dotted and T’s are crossed, I will write the email copy in conjunction with the client to make sure it’s in keeping with their language but it also has a strong call-to-action, and a deadline.”

Jamie speaks of another client who was looking for ways to utilise their company database but were unsure of where to begin.

After enlisting Jamie’s help, they dusted off their old database and got it to the point where it could be used, and then sent an email campaign making an offer to past and current clients.

“They generated nearly $300,000 in turnover in a couple of weeks as a result of that specific email campaign,” he says delightedly.

For Jamie, that’s the rewarding part.

“On one hand I’m trying to take a 30,000 foot view of the business overhead, and on the other hand I’m a details guy.

“So combining the two to build out a campaign like that, then seeing people work their way through it and my clients coming back to say they’ve got, say, five new sales they wouldn’t have otherwise got, that is very rewarding.

“It’s also exciting to see the lightbulb go off in their minds, realising they’ve been missing out on all this business for so many years because they’ve been ignoring their past clients.”

Jamie began his own business back in 2010 and almost eight years on he’s juggling it with family life and two young boys, aged eight months and almost three.

As well as being “the back-end guy”, he’s also a musician.

He plays piano, saxophone and ukulele as a “fun strummer” and teaches piano to children from his home one afternoon a week.

“I have six kids come to my house and learn piano off me, I do that to get my head out of the computer and marketing and into the creative space, and I love it.”

Jamie wanted to become a musician from a young age.

He began playing the piano at age eight and continued with the same teacher for 15 years.

“When she retired I was her longest standing pupil – I played classical but convinced her to try more pop and rock when Elton John wrote Song for Guy and I wanted to learn it.”

He discovered jazz as a student at Wellington College and learnt the saxophone as a result, as well as jazz piano.

“On the last day of school I got a message from the office saying Shand Millers musical instrument store was looking for someone to work in their sheet music department.

“I had basically wagged all my classes and just did music at school, so I was the first person they thought of, and off I went.”

Eventually Jamie took up a Bachelor of Music at Victoria University, majoring in composition.

Outside of his studies he played classical piano at former Plimmer House Restaurant, now Boulcott Street Bistro, and worked in the hospitality industry at Wilton House and James Cabaret.

An about-turn followed – he successfully applied for a job working for Wellington photographer Simon Woolf firstly in admin and then as one of his assistants (he had several!).

“I’d do BA5 (Business After 5pm) events, university graduations and weddings as well which was pretty exciting.”

After a stint overseas and working in a bar in Ireland, Jamie slotted back into his role at Woolf Photography before making a return to the music industry.

“I worked for three different musical instrument stores both here and in [Lismore] Australia over the next 10-12 years, and at that stage I was getting up to management level.

“I was doing all the marketing and advertising for each shop I was running and looking for better ways to do things.

“Eventually I got to the point where I was in my 40s, I couldn’t see a big future in staying doing what I was doing, so I started looking around for other things, which is when I discovered the online world of marketing.”

After finishing a course by original “back-end” specialist and American entrepreneur Steve Rosenbaum, Jamie took the plunge and set up his own consultancy.

“I realised this was something that businesses really needed and I could offer it, so I quit my job after 30 years of having a job, it was a huge step and it took me almost two years to get up the guts to do it.”

At the time Jamie was still living in Australia, in Byron Bay, but he moved back to Wellington soon after to build up his business.

“Living in Byron Bay was amazing, the lifestyle was amazing, but everyone there is a lifestyler so it was hard starting a marketing consultancy and finding potential clients.”

Jamie has since joined various networking groups so that Honk Marketing can gather momentum and it is.

He’s also formed an online ukulele community that has about 16,000 followers on Facebook.

“I’ve actually built a little business out of ukulele merchandise, I did it as a way to show potential and current clients how you can build a following on social media and monetise it.”

Jamie enjoys the fact that working from home allows him to also be a family man.

After this interview he was taking his wife and two boys to Aroha Retirement Village where he runs a music group for toddlers.

“I take my ukulele and we have some fun for half an hour, it’s a very special time for me.

“It’s so fulfilling being able to share my love of music with all the little ones, to see their faces light up when their favourite song comes on and watch them do all the actions to go with it.

“Being able to run my business from home, and to have the flexibility to be with my family when it counts, is challenging, exciting and fulfilling, absolutely.”